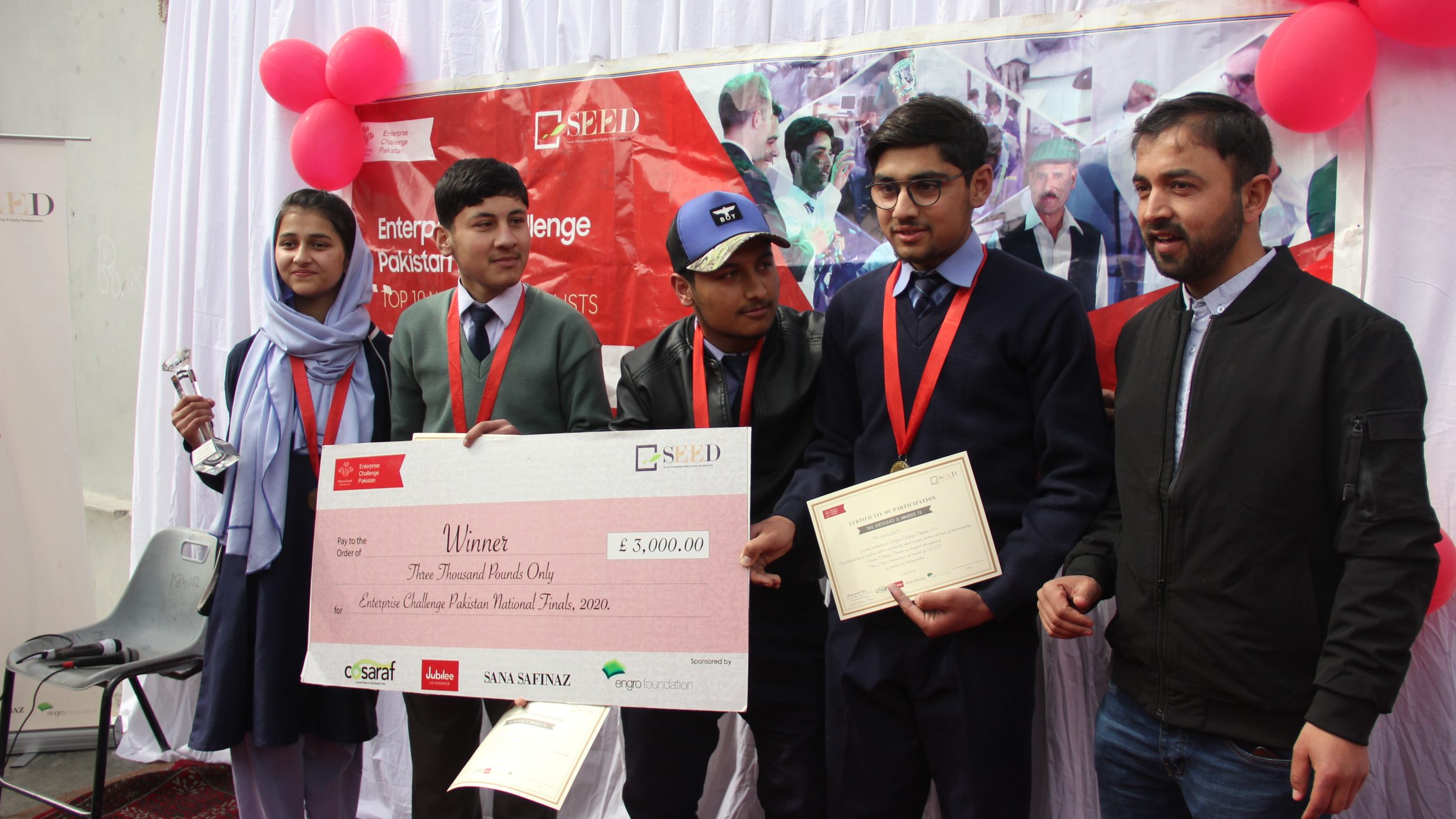 At Sell Hunza you can buy locally produced goods from the remote Hunza Valley in the north-eastern corner of Pakistan, 600 kilometers from the capital Islamabad.

The e-commerce platform was created by four school students as part of Enterprise Challenge Pakistan – an entrepreneurship programme which equips students with the basic skills needed to become social entrepreneurs.

“We want the children to understand that regardless of whether they choose to become an engineer, doctor or lawyer, they can also be an entrepreneur. And they can make a social difference through their entrepreneurship,” says Mariyam Toor.

She is responsible for the programme run by SEED Ventures, which invests in social enterprises and builds up social entrepreneurship in Pakistan.

Women get too little out of hard work

The idea emerged when they investigated social challenges in their community.

“We collected ideas, and after interviewing many women in the area, we decided to work with the empowerment of women,” says Fatima.

Women in the area are financially dependent on men. But they have something to offer. Many of them produce jewellery, handicrafts and local foods.

“They are very skilled, but they sell their products too cheap, and they don’t get enough out of their hard work,” says Fatima.

So, during the social entrepreneurship education, she and her team set about building an app and a website and training the women to sell their products online.

“We wanted to help them get a good price and become financially independent,” says Fatima.

Job creators rather than job seekers

More than 50 women from the Hunza Valley are now on the platform, which is an entry ticket to consumers across Pakistan. And the customers are also slowly getting on board.

“We want to market the platform so that even more people can become aware of the products,” says Shams, another member of the Hunza team.

Sell ​​Hunza is one of the examples that makes Mariyam Toor smile. But the entrepreneurship programme does not necessarily have to lead to the founding of new companies, she states.

Pakistan has a colossal youth bulge. More than two-thirds of the 180 million inhabitants are under 30 years old. Unemployment is high. And many do not feel that they have the skills to accept a job when they are offered one, explains Mariyam Toor.

It is therefore important that the students acquire skills through the program which they can use for the rest of their lives – regardless of whether they become entrepreneurs or not.

“The program aims to train job creators rather than job seekers. But overall, we want to develop qualities that can get them through life well, even if they don’t want to be entrepreneurs when it comes down to it,” says Mariyam Toor.

Better at problemsolving and decisionmaking

Enterprise Challenge Pakistan is spread to 80 schools in 30 cities of Pakistan. It runs over 12 hours, during which students are taught how to build a business, understand customers, sell products and pitch to investors. In addition, they are made aware of the concept of social entrepreneurship within the framework of the UN’s Global Goals.

The education consists of videos on YouTube as well as a computer game in which the students game their way through all the phases of starting and running a business. They then have to come up with a business idea which solves a problem in a commercially sustainable way. And they must formulate this in a business pitch.

The best teams – typically one team from each of Pakistan’s seven provinces – are flown in for a grand final in Karachi, where they pitch live in front of a panel of judges as in Dragons’ Den. The best team win money which they can invest in development of their businesses.

In addition, participants generally report that they have gained more self-confidence, have become better at working in teams, thinking creatively, solving problems and making decisions.

And these are important skills to have with you in life, points out Mariyam Toor.

“It gives them some resilience and the understanding that it’s okay to fail as long as you learn from it and get back on your feet,” she says.

We want to empower women across Pakistan

In the Hunza team, Fatima emphasizes that she has learned a lot about teamwork. She also highlights the many presentations the team has had to make during the process.

“We have really learned a lot from the programme,” she says.

Shams won’t rule out a potential career as a social entrepreneur.

“I think I will go in that direction and start new social enterprises in the future when I have finished my schooling,” he says.

They plan to further develop Sell Hunza alongside their schoolwork. And they both hope that the platform will grow bigger over time.

“We want to cover all areas in Pakistan where skilled women live who are financially dependent. We will to empower women across Pakistan, inshallah,” says Fatima.